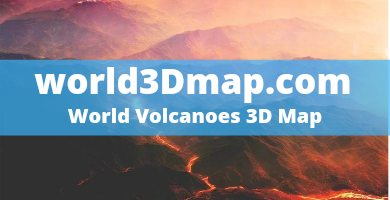 Are you searching World Map of Volcanoes? In World3dmap you can find an interactive map with all volcanoes in world. Here you can see all about vocanoes today around the world.

The action of volcanoes expels different gases into the atmosphere, including CO2, SO2, H2S, HCl, HF, HBr, OCS and CS2, the first two being the main causes of climate change.

What gases do volcanoes emit?

Inside the crater of a volcano there is nothing alive and many small fumaroles (holes) release nasty gases. There are many colorful minerals being deposited from the gases as they cool. The most important gas is water, and then carbon dioxide. These two important gases are not poisonous. Sulfur dioxide, hydrogen chloride, and hydrogen fluoride are emitted, as well. They are strong poisons and cause pollution problems

Here we highlight several of the main facts about volcanoes:

What country has the most volcanoes?

Indonesia has the most volcanoes, by far. It is really a special place because there seem to be volcanoes all around, in all directions. Merapi (which means “mountain of fire”) erupted in January 1994 and killed a few hundred people.

Which is the biggest volcano?

How old is the oldest volcano?

The oldest volcano is probably Etna and that is about 350,000 years old. Most of the active volcanoes that we know about seem to be less than 100,000 years old. Volcanoes grow because lava or ash accumulates on the volcano, adding layers and height.

How many volcanoes are in the us?

There are about 169 volcanoes in the United States that scientists consider active. Most of these are located in Alaska, where eruptions occur virtually every year.

The history of volcanoes dates back thousands of years and there have been many eruptions throughout history. Then we leave you some incredible images of volcanoes

Volcanoes and earthquakes are closely related on earth, if you want to see the latest earthquakes that have occurred around the world you can see it in our interactive map of recent earthquakes.

Hawaii is an increasingly popular travel destination that is made up of 8 main islands: Hawaii, Maui, Oahu, Kahoolawe, Lanai, Molokai, Kauai, and Niihau. Each island has special characteristics that make them unique destinations.

The Volcanoes National Park is located about 45 minutes by car from the city of Hilo and was founded in 1916. It is characterized by its extraordinary biodiversity that is spread over its 130 thousand hectares.

Volcanoes to visit in Hawaii – Honolulu:

If you go sightseeing in Hawaii, it is absolutely essential that you visit the Volcanoes National Park, a wonderful place very different from anything you have seen before. In this section you will be able to find all the necessary information about the most interesting places to visit in this corner of Hawaii.

The largest volcano on Earth is Mauna Loa in Hawaii.

The largest volcano on Earth is in Hawaii. It’s called the Mauna Loa. From sea level it is 4,169 metres high. However, under the sea it also goes down another 5,000 metres.Since 1843, it has erupted 33 times.

KILAUEA:
This is undoubtedly one of the most popular places on the island, the one that no traveler wants to miss. But apart from visiting the vicinity of the volcano and enjoying a unique show in the world, it is interesting to visit the museum, where you can learn all the history of this famous volcano.

HALEMAUMAU CRATER:
This will be an interesting spectacle as well: a visit to the steam columns of the huge crater whose interior is known as the home of the volcano goddess Pele. In 1967 this immense crater was filled with lava but over the years it has emptied.

PUU OO VENT:
Kilauea’s lava activity is currently not centered in the caldera, but rather at the top of the volcano. From Puu Oo Vent you will be able to observe different underground lava flood tubes from the Puu Oo that dramatically empty into the sea. Without a doubt, this visit is one of the fundamentals of the park.

how many volcanoes are in Hawaii?

Currently, there are three active volcanoes in Hawaii. On the island of Hawaii, you will find the Maunaloa and the Kilauea in the Hawaii Volcanoes National Park.

The park, as its name suggests, is home to several volcanoes. And although many of them are currently inactive, there are two that are still active: Maunaloa (whose last eruption was in 1984 but is known to be still alive) and Kilaue (which has been erupting since January 1983).

Kauaʻi (known as Kauai outside the Hawaiian Islands) is the oldest and the fourth largest of the main islands of the Hawaiian archipelago, with an area of ​​1,430.43 km². It is also known as “Garden Island” or “Garden Isle”

Towering over the island of Maui and visible from just about any point, Haleakala Crater is a force of nature in every sense. At 10,023 feet above sea level, it is a dormant volcano.

The national park is known as a refuge for mountain gorillas. It is home to five of the eight volcanoes of the Virunga Mountain Range (Karisimbi, Bisoke, Muhabura, Gahinga and Sabyinyo)

Three volcanic mountain ranges cross Costa Rica: the Guanacaste Range, made up of volcanoes of such importance as Arenal or Rincón de la Vieja; the Central Volcanic Range, home to the well-known Poás, Barva, and Turrialba, and the Talamanca Range, which has only one volcano.

Near the city of Alajuela, 20 kilometers west of San José, stands this active volcano whose last eruption was documented in 1953.

Since in 1968, after more than 500 years of inactivity, the Arenal volcano began to expel lava and ash, it has been considered one of the most active volcanoes in Costa Rica. Also, for this reason, one of its greatest tourist attractions.

With the highest altitude of all the volcanoes in Costa Rica, the Irazú commands respect with its name alone. The indigenous word Iztarú, from which Irazú derived, meant mountain of tremors.

The Turrialba volcano is not very popular with tourists visiting the volcanoes of Costa Rica. In part, due to having to compete with his older brother Irazú, with whom he shares a base. On the other hand, due to its intense volcanic activity, which has motivated the prohibition of accessing it on several occasions. The volcano registered one of its largest eruptions in September 2016, spewing clouds of gases and ash that reached 3,000 meters in height.

In the province of Guanacaste, 25 kilometers northeast of Liberia, this volcano is surrounded by mysticism and legend. They say that an indigenous princess fell in love with an enemy warrior. The princess’s father, contrary to the relationship, threw the young man into the crater. In order to always be close to him, the princess retired to live next to the volcano and learned to heal with the local plants, a work that she continued also during her old age. For this reason, the local people began to call the volcano the Rincón de la Vieja.

The Barva volcano is part of the Braulio Carrillo National Park, one of the largest in the central area of ​​Costa Rica.

Around this volcano, in the north of Costa Rica, stands one of the best kept secrets in the entire country. The Tenorio Volcano National Park, although difficult to access, hides corners of great beauty and is considered a magnificent place to go hiking and get into the wildlife of the area.

In Guatemala there are approximately 288 volcanoes or structures of volcanic origin. Only 8 of these have activity reports in historical times and 3 are the most active today.

Still, 37 are officially recognized as volcanoes by the National Federation of Mountaineering. Instead, the National Geographic Institute recognizes 32.

Italy is a volcanically active country, containing the only active volcanoes on the European continent. The country’s volcanic activity is mainly due to the presence, a short distance south of the border between the Eurasian plate and the African plate. The magma erupted by Italian volcanoes is thought to be the result of the upward forcing of molten rock by the subduction of one plate below another.

There are three main groups of volcanism: a line of volcanic centers running northwest along the central part of the Italian peninsula (see Campanian volcanic arc); a cluster in the northeast of Sicily; and another group around the Mediterranean island of Pantelleria.

In Spain, the volcanoes are not very active, since the last Spanish volcano to erupt in Spain was the Teneguía in 1971 and the Tagoro volcano on the island of Hierro in 2011. Despite this, Spain has numerous volcanoes, the Most of them are located in the Canary Islands, these being the only active volcanoes in Spain at present, although we can also find other inactive volcanoes in various parts of our geography.

These are the 10 most important volcanoes in Spain:

In this video you can learn a lot about volcanoes for kids. Do you know how Volcanoes Work? What makes Volcanoes Erupt? You can see it and tell us what you think about this website, help us to improve.