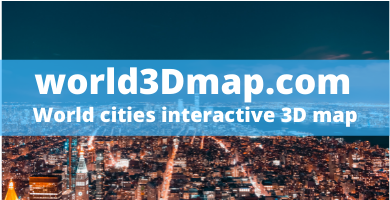 If you want to see World cities and locate it, on this website you have an interactive map of the earth in 3D with all capitals of each country in the world.

Explore worldwide satellite imagery and 3D best World Cities. This map allows people to click on any of major world cities such a New York, London, Paris, Mumbai, Shanghai, Tokyo, Seoul, Sydney… It is a world cities definition of all World Capital Cities.

TOP 5 safest cities in the world

We have collected and researched various data sources, in which we recommend these 5 cities around the world that we believe will be the safest for travelers in 2021:

South Korea, China, and the United States are the countries that lead the world in building and deploying 5G technology.

Only three of the cities in the 5G global top ten are capital cities: Riyadh, Tokyo, and Dublin. The following cities have the most 5G networks across the globe. These data are in continuous growth.

We use a world cities api for the 3D interactive world map, you can search World Capital Cities at top of page in our interactive 3d map or more interactive earth maps in World3dMap.

If you want t see all world cities clock, here we leave you an interactive clock map.