During a volcano explosion you can see different types of volcanic eruption. Various gases, lava or ash are expelled from a vent or volcanic fissure. and volcanologists have classified various types of volcanic eruptions. They are often named after famous volcanoes where such behavior has been observed. Some volcanoes may exhibit only one type of eruption during a period of activity, while others may vary their type of eruption in a changing eruptive series.

All types of volcanic eruptions, definitions and eruptive characteristics of each type:

A caldera is a large depression that forms when a volcano erupts and collapses. During a volcanic eruption, the magma present in the magma chamber below the volcano is expelled, often forcefully. When the magma chamber empties, the support that the magma had provided within the chamber disappears. As a result, the sides and top of the volcano collapse inward. Calderas range in size from one to 100 kilometers (0.62 to 62 miles) in diameter.

A fissure vent, also known as a volcanic fissure, is a linear volcanic vent through which lava erupts, usually without any explosive activity. The vent is usually a few meters wide and can be many kilometers long. Fissure vents can cause large floods of basalts and lava channels. This type of volcano is often difficult to recognize from the ground and from outer space because it does not have a central caldera and the surface is mostly flat. The volcano can generally be seen as a crack in the ground or at the bottom of the ocean.

The volume of material expelled from Hawaiian eruptions is less than half that found in other eruptive types. The constant production of small amounts of lava builds up the large, broad shape of a shield volcano. Eruptions are not centralized at the main summit like other volcanic types, and often occur at vents around the summit and in fissure vents radiating from the center.

Strombolian eruptions are a type of volcanic eruption, named after the Stromboli volcano, which has been erupting continuously for centuries. Strombolian eruptions are driven by the explosion of gas bubbles within the magma. These gas bubbles within the magma collect and merge into large bubbles. These grow large enough to rise through the lava column.

Upon reaching the surface, the difference in air pressure causes the bubble to explode with a loud bang, sending magma into the air. Due to the high gas pressures associated with lavas, continuous activity generally takes the form of episodic explosive eruptions. During eruptions, these explosions occur every few minutes.

An example of types of volcanic eruptions, in this case the Strombolian eruption is the La Palma Volcano and to see everything related to this volcano we show you the latest news about the La Palma volcano eruption in the Canary Islands.

Vulcan eruptions are a type of volcanic eruption, named after the Vulcano volcano. In Vulcan eruptions, the highly viscous magma within the volcano makes it difficult for the vesiculated gases to escape. As in strombolian eruptions, this leads to the build-up of high pressure gas, which eventually blows the cap that holds the magma down and results in an explosive eruption.

However, unlike strombolian eruptions, the ejected lava fragments are not aerodynamic; This is due to the higher viscosity of the Vulcan magma and the higher incorporation of crystalline material detached from the previous layer. They are also more explosive than their Strombolian counterparts, with eruptive columns that often reach between 5 and 10 km (3 and 6 miles) in height.

Peléan eruptions are a type of volcanic eruption, named after the Mount Pelée volcano in Martinique, the site of a massive Peléan eruption in 1902 that was one of the worst natural disasters in history. In Peléan eruptions, large amounts of gas, dust, ash, and lava fragments are expelled from the volcano’s central crater, driven by the collapse of the rhyolite, dacite, and andesite lava domes that often create large eruptive columns.

Peléan eruptions are characterized primarily by the incandescent pyroclastic flows that they drive. The mechanics of a Peléan eruption are very similar to that of a Vulcanian eruption, except that in Peléan eruptions the volcano structure is able to withstand more pressure, so the eruption occurs as one large explosion rather than several more small.

Plinian (or Vesuvius) eruptions are a type of volcanic eruption, named after the historic eruption of Mount Vesuvius in 79 from Mount Vesuvius that buried the Roman cities of Pompeii and Herculaneum. The process that drives Plinian eruptions begins in the magma chamber, where dissolved volatile gases are stored in the magma.

Gases form vesicles and accumulate as they move up the magma conduit. These bubbles clump together and once they reach a certain size (about 75% of the total volume of the magma conduit) they explode. The narrow confines of the conduit force gases and associated magma upward, forming an eruptive column. The speed of the eruption is controlled by the gas content of the plume, and low-strength surface rocks commonly crack under the pressure of the eruption, forming a protruding structure that pushes the gases out even faster. 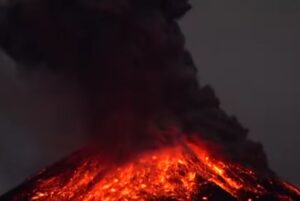 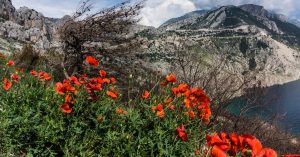 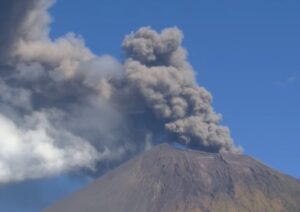 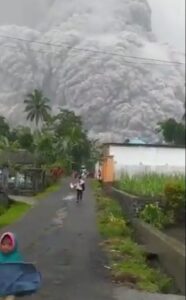 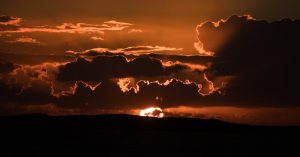 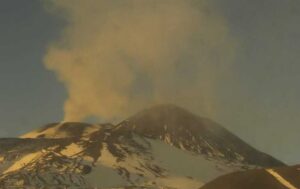